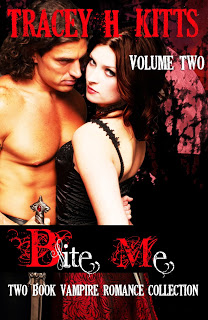 Part of the Boxed Sets series:

The Bite Me Vampire Romance Collection, VOLUME TWO includes:
1. Eden
2. Wicked City
Eden
Catrina's world is turned upside down the moment she agrees to Viktor's plan. Who even knew that Abraham Van Helsing had a younger brother? Not only that, but a brother who was turned by the King of Vampires and who held such obvious power. Now she must deal with the consequences of her actions and an attraction she can no longer deny.Viktor wants her to spy on the alpha werewolf, Alexander. He suspects Alex is responsible for the murder of a fellow vampire. However, there is one major problem with this plan. The werewolf is just as hard to resist as Viktor and Catrina is caught right in the middle.Warning: This book contains, graphic language, graphic sex, violence, and two smoking hot heroes.Wicked City
Lavinia accepted what she is a long time ago. She isn't squeamish when it comes to blood or her sexuality. After all, both blood and sex are necessary to sustain a succubus. She is a well-trained assassin. Working for her fellow vampire and occasional lover comes naturally for her. When she is sent out to kill someone, they die. It's that simple. But what if her target means more to her than he should?

Synn thought he knew what he was getting into when he encountered the succubus that first night, but he may still be in over his head. She was sent to kill him, and still he wants her. One man has never been enough for Lavinia, however, the wizard Synn thinks he's man enough for the job.